People talking shit to you- you worked the whole of the 80s in crap jobs where men back then were allowed to feel your tits and speak down to you. Now, when twonks chat shit at you, it’s easy to walk away mid chat. Fuck that shit, you never have to listen to that again. You served your time paying attention to people who are oxygen thieves.

Men being handsy- yet again the whole of the late 70s and 80s you worked in factories, shops and pubs where men openly felt your boobs, tried to finger you when you changed a beer barrel and fuckwits regularly explained how you can’t rape a woman who isn’t a virgin or wears too much make up. Now when some bloke on the bus or tube puts his hand near you FUCK THAT you stab it with a nail file or shout like fuck into his face in public.

Fashion Mags telling you what to wear- are you fucking kidding me? We did the perms, the pink crimping, the peplum waist, the baggy dungarees, the neon leg warmers, the flat court shoes, the Lady Diana hair flick, the stiletto and miniskirts NOW we wear the flying fuck what we want. We will wear jeans and a jumper any time. Until men win as many Oscars as the costume designer who turned up at award ceremony’s giving not one fuck then she will be my spirit animal forever.

People on social media telling us what to do get fucked. You don’t like my comedy? My Writing? My body shape? My photo’s? Here’s what we will do…you get fucked. I had men tell me what to do my entire life and women judge my choices. This is my life now go stand in a corner and get yourself to fuck. I will be the one over there laughing.

Men telling me am old and ugly here’s the thing- are you stunningly perfect and beautiful? No…well listen up Quasimodo if you look like you swam up from Sellafield or are fat and bloaty that’s fine. Just don’t fucking dare comment on my body you clackwanker.

I am 55 years old, I have buried three family members, paid off my mortgage, jailed a sex offender, been put in prison for possessing guns that weren’t mine, been married since I my first period, raised a daughter who is also a comedian, ran a bar for 15 years, been self-employed since I was 18, wrote a bestselling book, wrote and starred in a play that went to New York, wrote 15 one women shows and watched my murdered mother lie in a coffin…now what is it you want to tell me about how I should be living my life? Now fuck off.
Posted by Unknown at 00:45 No comments: 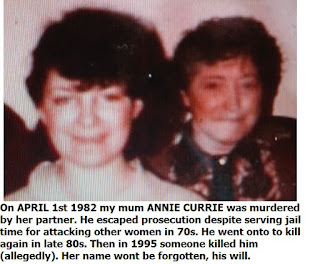 Back in 1982 when my mum went missing, the local Shettleston cops treated her as a wee drunk poor woman who they couldn’t be bothered wasting resources on. When she was found floating down the River Clyde they didn’t even bother to question her abusive boyfriend Peter who that day had stabbed my brother — as he was persistently asking Peter about his missing mother.
The cops just shrugged their shoulders and moved on. She was a wee poor insignificant woman who authorities never gave a fuck about.
Peter had served time for trying to kill women in the 70s but still the cops never asked why he was last seen at the river with my mum.
Peter told the cops mum fell in and legally he didn’t need to report this happening. Five days she was gone before the river gave up her battered body. Peter walked free to kill again.
Your social economic status should not be measured in how much the police care — remember my mum’s case was just two years after the famous attack on Glasgow woman Carol X who was gang raped and slashed to bits. Despite Carol X naming and picking out her attackers the cops refused to charge them and Carol’s private prosecution was one of only two to succeed in Scotland in the 20th century. The other involved a fraud case in 1909. She successfully jailed her rapists with the help of Lawyers who took her case on free of charge. It shocked a nation how a wee woman was treated.
Glasgow police had a history of ignoring the plight of female victims of violence.
I hope things have changed. It is too late for my mum but It’s not too late for women today and with organisations like Scottish Women’s Aid hopefully that attitude will be a thing of the past.
I wrote this for my mammy-
She had dark thick hair and quick hazel eyes; she could smile and shout at the same time.
With a chubby finger I would trace the lines around her eyes and make up stories about the moles on her chin.
She would sit with me and stare into my face. “What do you see Janey?” she asked me once.
“I see you, mammy, you have brown dots on your eye,” I whispered back.
“They are the stains of the past,” she told me as she cupped my face close.
The stains of her past could have been cleansed, I could have washed them with her in our old age — but she went away and died too young, I was too young, I miss telling stories about her face.
I am a mum, I trace the shape of my daughter’s face with my wrinkled fingers and I get to tell her wondrous stories about the moles on her chin; she has brown dots on her eyes, they aren’t blemishes though.
They are stars passed down by a woman who mistook them for stains.
Posted by Unknown at 12:06 No comments: