Just had a fabulous time at Glasgow Stand comedy club.

It's a brilliant comedy club and comics who know the circuit adore it, we all love doing The Stand Comedy Club.
The sell out crowd were fabulous, the swell of laughter and applause lifted my spirits. I love my job.

I walk off stage and stand at the bar waiting to speak to the staff.

I am elated, it was a belter of a gig and I feel great that I did a good job.
A young man comes over  - I can see it in his eyes...he is going to say it and he does.

He smiles, grabs my hand and blurts it out -
"My girlfriend at the bar" he points to a young woman in a blue dress who is waving at me "She normally HATES female comics but she loved you" He stands back and waits for me to be amazed at this news. He waits and I stare stonily at him.

My stomach sinks, he is smiling...he is expecting me to throw my arms in the air and yell "WOW I MADE YOUR SEXIST GIRLFRIEND HAPPY....FUCK ME AM SO GRATEFUL THAT SHE LIKES ME".
I stare at him and reply "She HATES ALL women comics? Even the ones she has never seen? Has she ever said 'I HATE ALL male comics?' has those words ever came out of her mouth?"

He looked stunned "No, she has never said that, she likes male comics". He looks crestfallen that I am not utterly grateful.

I reply "She has never seen a male comic bomb?? Has she seen every male stand up and loved them all? Or does she generally just not like women in their chosen profession?"

"I am trying to give you a compliment" he whines with a hurt face.

"No, you aren't" I explain "First of all she can't speak for herself she has you to speak for her, so this isn't your opinion so am sorry I am saying this to you, but that isn't a compliment. Basically it means she HATES all my friends and my daughter who is a comic and she hasn't met them"
At this the woman comes over.

He tried to make a face to tell her not to.

She doesn't read his expression as she is too excited to tell me how much she hates all women who tell jokes but not me.

I suspect her surname isn't Pankhurst.

Before she can speak I ask her "What do you do for a job?" she tells me she is a hairdresser as she touches my hair.
I shrug her off and say "I HATE ALL female hairdressers, every single one of them".

She is stunned. Her face is closing in on itself.

I say to her "It's awful isn't it when someone hates what you do for a living without ever seeing your work but just based on your gender? You're the woman who HATES ALL FEMALE COMICS"

She tries to explain "But I do HATE female comics but you changed my mind" She smiles hoping I am going to hug her for this news. Maybe we will swap friendship bracelets or punches...who knows?

I stare at her and wonder how that can happen? How can a woman HATE all female comics and take the chance on coming to live comedy clubs and not worry she might be faced with a whole night of women comics....THE THING she clearly HATES.
I am joking....nobody ever wanders into an all female comedy gig at a regular club, THAT never happens unless it's a charity night or something.

I say to her "Can you hear yourself? Why do you HATE all female comics? Did you see one woman who wasn't funny and you just judged a whole gender of comics based on that one experience? Have you ever had shit sex with a bloke and that one guy who ejaculated too quick made you judge all men based on HIS SHIT performance and that made you HATE man sex?"

She blinks and says "I don't think I like you any more".

I reply with a smile and throw up my arms "Good that's you back to HATING all female comics, I wouldn't want you breaking your golden rule of hating women now would I?"

I think I need to learn to deal with this better, but it happens to me and heaps of other female comics every week. I get exhausted dealing with it.

PS- She also managed to tell me her female hero was singer from Girls Aloud Cheryl Cole (Ferndandez Versini or whatever man's name she took), the famous toilet boxer that got arrested for attacking a black female toilet attendant over a lollipop incident. 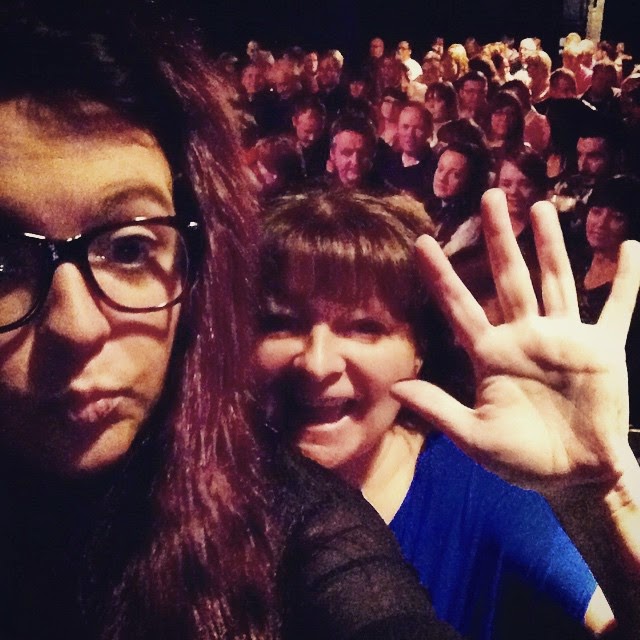