MY VERSION OF BRIEF ENCOUNTER

Starring Celia Johnston and Trevor Howard.
It really is a fantastic film and so well shot.

Although I cannot stop laughing at the whole thing, poor Celia plays a well kept middle class woman who lives in Bromley (Somewhere like that), her husband is a banker who wears a full three-piece suit at home (including waistcoat) and looks around 67 although he is probably only 26!

He likes to stand near the open fire dressed in an axminster suit sweating buckets and puffing on a pipe.

They have two kids, a boy and a girl, both have cut glass English accents that I swear to God -Prince Charles would have struggled to maintain, I have never heard such upper class pronunciation!!

Celia also has a cook and house keeper. It seems her only duty is to go shopping for some vegetables and wander round Boots in a tight constricted wool coat with big buttons.

Sweating lots is a feature in this family.

Can she do this locally?
NO fucking chance she has to get a train into the nearest town.

In the station there is a proper tea room with a slovenly older woman who flirts with that bloke who played the working class dad in My Fair Lady...him that sang "I'm getting married in the morning" there is a coal fire (there is an open fire in almost every scene).

The very common people in the train tea room are the only believable characters in the film.

This woman takes a train and picks up some shopping, a few books from 'Boots'?? Then she goes to the 'pictures'.

The 'pictures' being the movies...this lazy bastard picks carrots, books and a movie...then stares at some local statues round town, then wanders home to eat the cook’s dinner.

Anyway one day it all goes very different.

She meets a doctor by chance at the well frequented train station and gets his attention as she gets a 'bit of dust in her eye'.

He pokes the corner of a hankie into her eyeball....all being a metaphor for his cock and they are suddenly .....staring at each other.

Before long they are meeting up every week as she goes shopping and then off to the 'pictures' with her new friend.

I have never seen so many smokers in my life as in that picture house, (Jesus the smoke is so thick I am surprised that people can see the screen). It was like a smoking competition.

They start to get excited about meeting up despite both of them being married; Trevor explains that his wife is very small, dark and very frail.
Which suggests he cannot have sex with her in case she breaks, but he never explains her illness, which is weird as he is a doctor. He could have told us the secretive bastard.

This is in the social era when if a woman 'looked' at another man in any sexual way she gets sent to a mental health sanctuary to get 'electric shock treatment ' Yet despite the social taboos they continue to keep each other company.

They meet up and they go into the country for a walk, have a wee boat ride, in which he falls into the water-then they both go to the boatyard to dry off and of course MAKE TEA (as if to go a whole day without tea would have been insufferable).

She dries his sodden smelly socks over the hot stove (yet another coal fire) in the boat house as the poor boat house attendant sits in a bad mood as posh people have hogged his heat.

They fall in love over the steam of wet woollen socks.

He tells her that their affair has driven him to leave England and live abroad as they can never be together.

He suggests going to his friend's apartment for some quiet time and a last goodbye-(yeah right mate!) and leaves her to think about it when she refuses to come along. Celia strolls around the station debating whether or not to go with Trevor; it was a big dilemma for her.

But her pussy was shouting “Eat Me!!”

Eventually she ends up in the flat (which was very swish and YUPPIE-ish for mid- 1940's) and sitting there with her doctor friend, the sexual tension was palpable...Just when you think they may actually touch knees- they are interrupted by the doc's mate (Who incidentally is the gayest man I have EVER seen in my life).

Celia flees the apartment by the back door in a running hysteria (how awful when one has to leave by the service entrance) and goes running through the streets hysterical, dishevelled and ends up sitting in the park smoking and crying pulling Kirby grips from her hair (this appears to be such unruly behaviour in Bromley that even a policeman stops to comment and check on her!)

She eventually phones her husband at home and lies easily about being out so late without an escort, (She should have fucked her doctor, she was a competent liar and could have carried it off).

She then walks to the railway station soaking wet and sad and meets Trevor in the tea room (he had been looking for her all over the statues and benches of Bromley frantically) and now is saying his final goodbye as he is going to emigrate to South Africa (Hopefully not to buy a farm coz that will surely end in tears, posh English farmers don’t fit in well, especially with a weak sick wife).

They are interrupted by a 'beastly but kindly? Woman friend (who talked too much-that would be my role in that movie!)

Therefore, they don’t get to say goodbye properly! (they drink four cups of tea; I am convinced it's all the fucking caffeine that's making them so highly strung).

Trevor simply squeezes her shoulder as he leaves the tea room to catch his train home to his frail skinny wife with a nameless wasting disease.

Celia gets so upset she dashes onto the platform. The express train comes hurtling through and she contemplates suicide!

But she can't do it as she is too posh and English also she knows there are dishes to arrange for summer picnics and socks to mend by a roaring fire.

(seriously lady -go home and touch yourself woman, get a grip)

Finally she goes home to her husband who is still wearing a three piece Wooster thick tweed suit sitting trying to do a crossword in a house with a roaring coal fire...(fuck he must be sweating & dying to strip off and sit in his vest like a Northern unemployed man that he has read about in the newspaper).

I will tell you why, you fancied another man, the thought of sleeping in twin satin covered beds with a man who is clad in wool and smokes a pipe who cannot fucking finish a cross word without interrupting your private thoughts was KILLING you.

You wanted a blonde skinny dashing doctor who loves the movies, smokes fags and seems to work a three day week for the NHS and had time to hang out on boating lakes, and took you for champagne lunches, he even had a fancy Pied- a -Terre and a snappy gay friend....it's OK to admit it!

I think I will watch "To kill a Mocking bird " next and give my version of that? 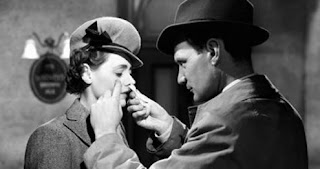