Edinburgh and THE FREE FESTIVAL

I recall standing outside the Pleasance Dome flyering my show a few years ago.

I was exhausted and knew I had to fill a big room and faced losing cash so I was anxious and desperate to make sure people came to see me.

I had rented a good flat and paid for amazing posters and had what I believed to be a fabulous show.
Then I spotted a couple of people who had seen me at a showcase show and had taken my flyer after the gig as they liked my stuff. I brightened up and as I approached them I watched a comedy promoter hand them two free tickets to his latest newly signed act's show.

They took them. They were FREE.

He had a HUGE wad of free tickets and was giving them to people all around the Pleasance Dome. I lost the sale. I watched and my heart sank as people didn't give a fuck how funny I had been at the 1pm showcase show.

They had free tickets.

Free shows are part of the fringe and belong in the free venues.

No doubt this year the BIG Four will release the BEST EVER SALES AT THE FRINGE and sit back as they manipulate the figures and the PR will spin it good. It was a fair year I think but it wasn't a bumper.

I know that the figures aren't always true, for ONE BIG SELL OUT there are hundreds of smaller shows underwriting them in the big venues and those comics were doing it on their own cash in the hope of a crowd.

They go home skint, owing money and artistically broken.
I have no issue wth the big paid venues, I just see issues that the Free Festival can resolve.

On the last weekend of the fringe I watched BIG NAMED ACTS give away TWO for ONES on the last Thursday and Friday. That's not a great financial sign and was I aggressively flyered for a comic whose face graces the BILLBOARDS to buy tickets for his 'EXTRA SOLD OUT SHOW' which is a weird oxymoron. It can't be sold out and still have tickets to sell.

People were so scared of losing face.

I was glad I chose to take part in Alex Petty's Free Festival at The Counting House. I considered it last year and checked out the venues and looked at all the options.

They put cash in the buckets. We left with a profit, a very good profit if truth be told. We also told the crowds if they donated silver and bronze coins we gave that to the homeless and later on we dished it out fairly round the city's street collectors.

The Counting House had its own set of challenges but were daily overcome by Big Brian and the staff. Me, Ashley and my own front of house staff Andrew and Helen ushered, crowd controlled and helped other acts audiences get into shows. We self managed. We directed people, we unblocked toilets, we mopped up spilt beer, we lifted up posters and flyers, we collected glasses and we even served beer when it got busy. We were a team.

I encouraged comics and acts to get up and pitch their shows to my big comedy loving crowd. I tweeted about other comics gigs and helped flyer for other shows. It felt like THE FRINGE.
We hung out in the independent comic book shop DeadHead Comics next door to Counting House. WE periscoped and tweeted and showed them how to manage their social media.

They gave us a set of keys and we ended up weeping buckets as we exchanged gifts and hugs when we left them to head home.

We had a fringe family.

The people who came to the shows were brilliant.

Ashley loved her first hour and she was also in a big musical event show at the Assembly that ran for two weeks. So she was on the Free Festival and the Big Venue festival at the same time.
A great experience for her. She also did some BBC radio Four Extra live work and I did Just a Minute for BBC Radio Four. It was brilliant.

Dealing with hard cash was weird. I felt like a mid price hooker, I haven't had that much money in my bag in years. We generally don't carry much cash as a society now. It reminded me of when I owned a pub and used to count the takings.

People no longer see the Free Festival shows as 'well it's free it must be shit' and I don't believe they ever did. This is a nice neat rumour and label put on it by the same people who resent the free shows but have no issue giving out free tickets at a paid venue for a show that can't shift a ticket.

Tax was a well worn phrase when talking about the free venues.

"Yes, but do the free festival comics declare their takings?" one comedy promoter asked me.
I don't think anybody has the right to assume anyone is fucking their taxes based on a dislike of their business model. If you have an issue with people not paying their due tax please go check Gary Barlow, Michelle Mone and some Tory peers before you nitpick at comics you avaricious cunts. While you are at it please make sure the big venues who boast "BEST YEAR EVER" are not putting their profits into an offshore account to avoid taxes in UK.

I love the fringe and this year I loved it more. It felt like the old days. It felt good and it felt fair.
I encouraged the people who were skint and living under austerity to come see our shows for free. I also encouraged people who saw the show to take money OUT OF THE BUCKET if they needed some cash.

Thanks everyone.
Posted by Unknown at 17:54 No comments:

He is 83 years old and has been the rock of my life.

His twinkly blue eyes, his impatience with things that take too long to happen and his ability to paint unusual water colours are just three of the things my dad imprinted my DNA with.

The Man who always has a clean laundered handkerchief in his pocket (thanks to his ever attentive son in law who cares for him daily, runs his house, washes his clothes and does all his major care needs ).

We are close, always have been.
He was and still is a brilliant grandpa to Ashley my daughter.

He took her holidays, took her swimming, took her to stare at squirrels and helped raise her alongside my beautiful step mum who passed away five years ago.

I called him two years ago from my pals flat in Los Angeles and I heard him having a stroke on the phone. His speech was slurred and his questions were bizarre.
My heart clenched and I had to hang up on him (not sure if that was the last time I would hear his voice) and contact my husband in Glasgow who took him to hospital and sat by his side for 34 hours.

I am blessed with good men in my life.

He recovered. Got more frail. No more would he get off the Glasgow subway tube and meet me at the stairs.

No more would he sit in a cafe with me and flirt with the waitress.

He was too frail , he became housebound.

Now as time has passed he is slowly succumbing to dementia.

The proud, funny and stubborn old bastard who laughed at my filthiest jokes now calls me to ask when he is going home. "You are home dad" I gulp down the phone standing outside a comedy gig at 11pm at night. People around me are happy and laughing and my heart just feels as though it's cracked like a fragile crystal bauble.

"Well if you won't help me, then that's up to you" He shouts, his voice filled with anxiety and he bangs down his phone.

I have never let my dad down before. Now I am letting him down by assuring him he is safe. I blink tears in the street and run to get a cab to his house.

I hug him when I get into his house. He grabs my hand tight and looks into my eyes and says "Am sorry Janey, I hate being a burden, I love you" and then he puts his warm old hand and lays it on the side of my face and kisses my head.
My daddy.
The man who carried me over puddles is back.

"I am off to the fringe for a month dad, please be safe and don't wander outside when am gone I will worry" I say to him.

He smiles and tells me "My legs are fucked, even if I do get outside I can't get far and my son in law will keep an eye on me, get onstage baby it's where you are happy" 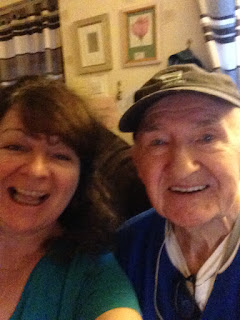 Be safe dad. Stay there till I get back. I will be home.
Posted by Unknown at 21:38 No comments: